It sits across the broad girth of Minneapolis like a belt. It cinches the city from the bluffs of the Mississippi River to the shores of its largest lake: the sparkling Bde Maka Ska. Like a belt, it forms a middle boundary between a top and a bottom. Like a belt, it keeps the pants up over a swelling belly. Like a belt, it has a buckle and that buckle is the intersection of Lake Street and Hiawatha Avenue, the throbbing commercial heart of Minneapolis’ primary artery, the epicenter of the Minneapolis polis, so perfectly emblematic of the city’s dazzling civic diversity, and, not incidentally, the epicenter of the days of rage incited by the police murder of George Floyd.

There are many great streets in Minneapolis. Some are longer, others are more beautiful, but none of them running precisely on an east west axis cleave through the same range of citizenry. In both the present and the past, Lake Street is a core sample of Minneapolis through every strata, rich and poor, immigrant and native, queer and straight, creative, entertaining, routine and prosaic, sacred and profane. It’s length bears witness to births and final resting places. It is both a way to get somewhere and a final destination. It spans the virtues and failings of the metropolis which, like all great cities, struggles continuously to invent and reinvent itself.

Working at the Minnesota Historical Society it was my pleasure to know the street more deeply through an exhibit we produced called Right on Lake Street. Originally conceived by my colleague Benjamin Filene and completed by Ellen Miller, Earl Gutnik and others, the core concept was a threeway partnership between the Minnesota Historical Society, In the Heart of the Beast Mask and Puppet Theater, which is an institution at the heart of Minneapolis, and the History Department of Macalester College. Public history students selected locations along Lake Street to research by interviewing people in the community to portray their stories. These stories debuted in public places along the corridor. The artists at Heart of the Beast built whimsical models of the various landmarks portrayed by the students for an exhibition at the Minnesota History Center and the student’s interpretations illuminated this ersatz cityscape. 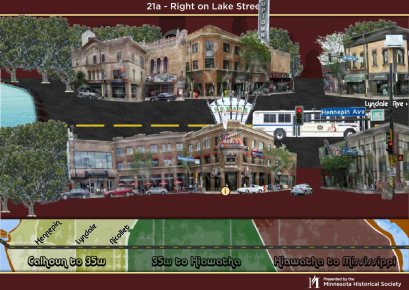 The exhibit, which opened in 2007, was like Lake Street itself. A little funny, a lot funky, and it represented the relentless change the avenue has witnessed. There was the story of the porn theater closed by community initiative. There was La Mexicana. There was the Schatzlein Saddle Shop and Ingebretsen’s Scandinavian Gifts and Foods. There were landmarks long gone like the Wonderland Amusement Park and Nicollet Park, the home of the Minneapolis Millers, the long defunct minor league team. We had an opening celebration that was well attended by our partners and the public. There was an online exhibit: 21A – Right on Lake Street (21A is the bus route that traverses Lake Street and the interactive exhibit allowed users to virtually follow the route.) It was an interesting experiment. Some of the work wound up adorning the public spaces of the newly renovated Lake Street Sears store which was transformed into the Midtown Global Market an institution that now is like a microcosm of the street on which it stands.

Someone made this custom Google map showing the damage left in the wake of the uprisings of the harrowing last week of May, 2020. Zooming out, the icons symbolizing protests, fires, and looting cluster along the length of Lake Street. These blemishes  splatter the street like open wounds. The scale is inconceivable.

This is a text widget, which allows you to add text or HTML to your sidebar. You can use them to display text, links, images, HTML, or a combination of these. Edit them in the Widget section of the Customizer.